When passengers file into an aircraft cabin upon embarking on their flight, it’s not uncommon to take for granted fully-prepped seats, properly disinfected lavatories, and the required attention to detail in the arrangement of amenities- in fact, it is expected. More recently, with increased scrutiny placed on healthy protocols before and after each flight, airlines are demanding a higher level of quality in the attention to detail and mindful efficiency provided by their staff and vendors in guaranteeing consistent service in the cabin.

At the end of October, AccuFleet International launched its Cabin Training Center in the company’s building at George Bush Intercontinental Airport (IAH). The goal was to create a world-class training facility for the company’s teams who provide cabin cleaning, upholstery maintenance, and disinfection services to some of the largest international and domestic carriers in the world in the company’s 12 locations across the United States.

Joshua Broussard, IAH operations manager, was a key participant in spearheading the effort.

“Most new employees have never been on an aircraft before and previously we would do most of our training onboard under the customers’ time restraints,” said Broussard.  “The Cabin Training Center allows us to familiarize the employees with areas of the aircraft and explain procedures in a less restrictive time frame. This greatly reduces lag time from when we hire and train new employees and decreases the common problem other vendors have of causing cleaning delays due to training new hires.” 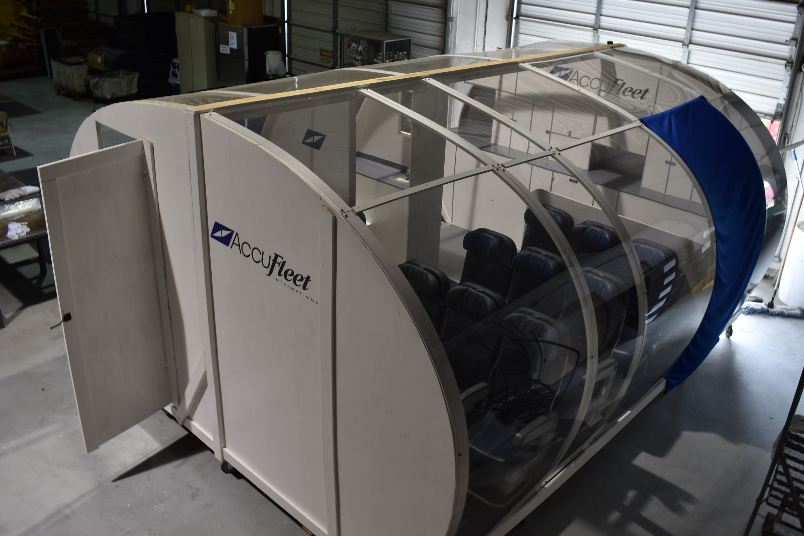 “The greatest benefit of all is that we can provide initial training for aircraft security searches in a mock classroom, before ever stepping foot on a customer aircraft.  Believe it or not but we have had new-hire employees come to work with us and they have never been inside of an aircraft before.  The Cabin Training Center can never replace a real aircraft, but being able to address common mistakes and emphasize safety protocols allows our employees to focus on what is most important when on the real aircraft – cleaning, disinfecting, and performing at higher efficiency with a lower likelihood of incidents caused by on-the-job training.”

The Cabin Training Center allows for AccuFleet to simulate training specific to each airline, using safety cards, magazines, pillows, blankets, and other items to recreate the task card and practice it in a less time-constrained environment. With the addition of the Cabin Training Center, AccuFleet International continues in its 40-year tradition of investing in innovative solutions to provide the highest level of service to its customers.